Dame Olivia Newton-John was one of the biggest pop stars of the ’70s. Born in Australia, she passed away peacefully at her Ranch in Southern California, surrounded by friends and family. She wrote her husband, John Easterling, in a statement on the singer’s Instagram account.

For those who grew up in the 70s, Randal Kleiser’s Grease was one of the most iconic films of the decade. It won the People’s Choice Award for Favorite Movie and Favorite Musical Motion Picture.

That was 44 years ago, and Grease’s message about repression versus freedom in American sexuality was the peak of the 70’s Sexual Revolution.

Quoting Easterling: “Olivia has been a symbol of triumphs and hope for over 30 years sharing her journey with breast cancer.”

Newton-John revealed in September 2018 her third cancer diagnosis, following bouts with breast cancer in the early ‘90s and 2017. She was treating cancer at the base of her spine.

She was a popular singer by the late 1970s, but her star-making role played the dreamy Sandy Olsson in 1978’s Grease, opposite John Travolta’s Danny Zuko.

Olivia Newton-John was a four-time Grammy Award winner and had global sales of more than 100 million records, becoming one of the best-selling music artists in the second half of the 20th century. The fact that Grease’s soundtrack is one of the world’s best-selling recorded music albums definitely helps the situation.

She was also an animal rights, environmental rights, and breast cancer research activist.

She sang on three of the movies’ primary hits: “You’re The One That I Want” and “Summer Nights” with John Travolta, and her swoony solo ballad “Hopelessly Devoted To You”. Thanks to these, she became the second woman to have two singles.

After winning a talent contest on a TV show, Sing Sing Sing, she formed Sol Four, an all-girl group with three classmates, at age 14. She recorded her first single, “Till You Say You’ll Be Mine,” in Britain for Decca Records in 1966.

She was offered the lead role of Sandy for the film adaptation of Grease after she met producer Allan Carr at a dinner party at Helen Reddy’s home. However, she was initially concerned with playing a high school senior at age 28.

When asked about the songs, she once explained in an interview by Billboard:

“I think the songs are timeless. They’re fun and have great energy. The ’50s-feel music has always been popular, and it’s nostalgic for my generation, and then the young kids are rediscovering it every ten years or so, it seems. People buying the album was a way for them to remember those feelings of watching the movie and feelings of that time period. I feel very grateful to be a part of this movie that’s still loved so much.”

To this day, her songs are still enjoyed. 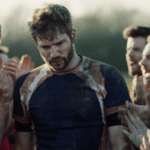 August 15, 2022 In From The Side: The Gay Rugby Drama Flick Coming to A Screen Near You