5 London Lidos to Enjoy This Summer

Believe it or not, London is a great city for outdoor swimming and there are 17 lidos dotted around the city, So, take your pick from one of these London Lidos for some relaxation this summer.

London Fields Lido from the Nudge

In the UK and London, outdoor lido swimming became a hot trend in the 1930s. At its peak, there were a total of 169 facilities. At first, it became an affordable recreational activity for the entire family to enjoy. The amount of lido’s meant that there was great accessibility, especially for those who didn’t have much money. However, over the years, transport links were developed and holidays were made cheaper, meaning many turned to more long-haul trips to enjoy a bit of H2O.

Nowadays, London, in particular, has seen a spike in memberships for outdoor lido swimming. The Outdoor Swimming Society – which is an online community of swimming enthusiasts – has reported a huge increase in its membership. In 2008 there were only 300 signed up to the site, fast forward to 2022 and they now boast of 25,000 budding backstrokers. This surge of interest is likely down to a more health-conscious Britain, following the pandemic, which saw hundreds of thousands of people lose their life, in the UK alone. As a nation, we are ready to take charge of our own health, and there’s no better way to do it than a relaxing dip in a beautiful historic (sometimes heated) lido.

Brockwell Lido is the gem of South London swimming. Opening in 1937, it tragically closed in 1990. But, after a local campaign, it re-opened in 1994. Part of Brockwell’s appeal is the beautiful ‘moderne’ and art deco style architecture that wraps around the pool. The facility, designed by Harry Rowbotham and T. L. Smithson, became Grade II listed by the National Heritage List for England in July 2003.

The pool is a bit on the chilly side as there is no heating, however, this is part of the appeal. Just a few years ago, Cold Water Swimming was a niche. But now, many brave enough to take the plunge are enjoying the countless health benefits that come from prolonged exposure to cold water. And, for those who are a little hesitant about dipping in the sea or river, this safe and regulated pool could be the perfect starting point for your cold-water adventure. 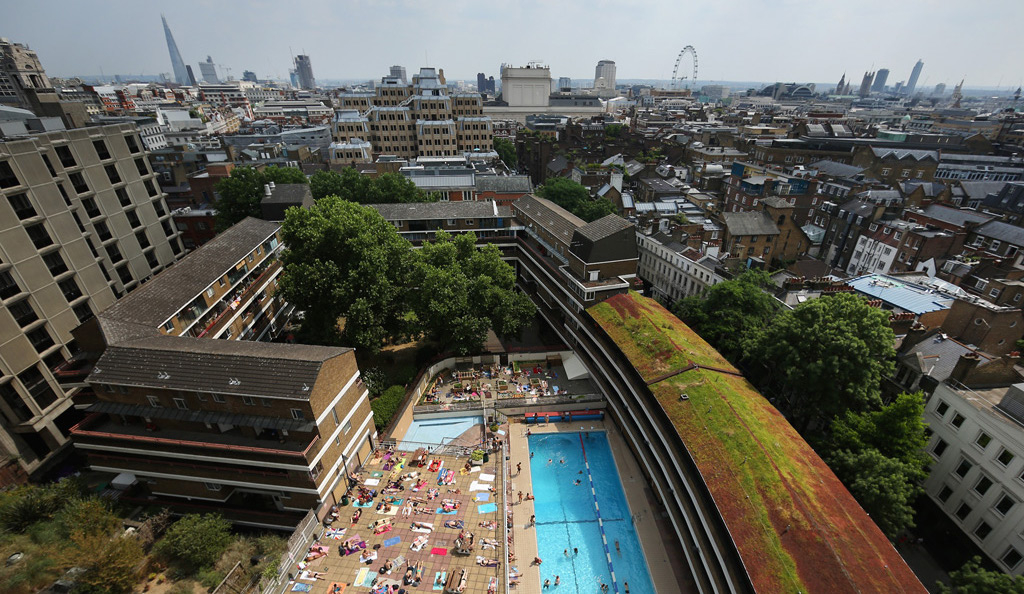 Incredibly, not many people know about the Oasis pool that is sandwiched between Soho and Covent Garden. It is also one of the few outdoor heated pools in London, complete with an elevated sunbathing platform, for those who wish to work on their tan.

The pool has a surprisingly long history, despite the modern building that it lives in. Built in 1728, the pool was first known as the ‘Bagnio’ – a Turkish bath. The Turkish bath then closed in 1840 but was reopened in 1852 by local parishes, with the new name: Bloomsbury Baths and Washhouses. However, the Oasis centre that we all know and love today came shortly after the war, hence its signature brutalist architectural surroundings. 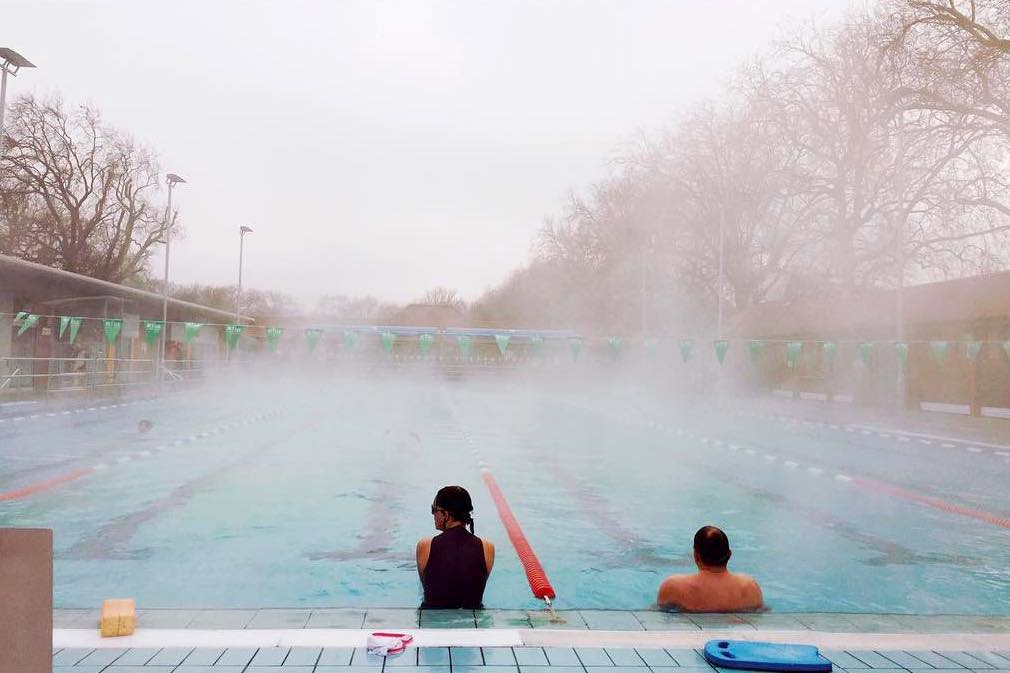 Hackney Lido is another heated pool on the list and is the perfect facility for those who want to prioritise fitness over relaxation. The pool boasts 50m in length and is wide enough to accommodate a large number of swimmers at one given time. Perfect if you want to power through those lengths without needing to overtake.

The lido opened in 1931 but was sadly abandoned in the 1980s, following Prime Minister Margaret Thatcher’s attacks on the Greater London Council, which rid London of many of its great lido’s. Following a lengthy campaign, it was finally reopened in 2006.

The Olympic-sized pool is also extremely accessible. Being part of the Better Gym Group, it boasts competitive prices and long opening hours, meaning you can swim first thing in the morning or late into the night. 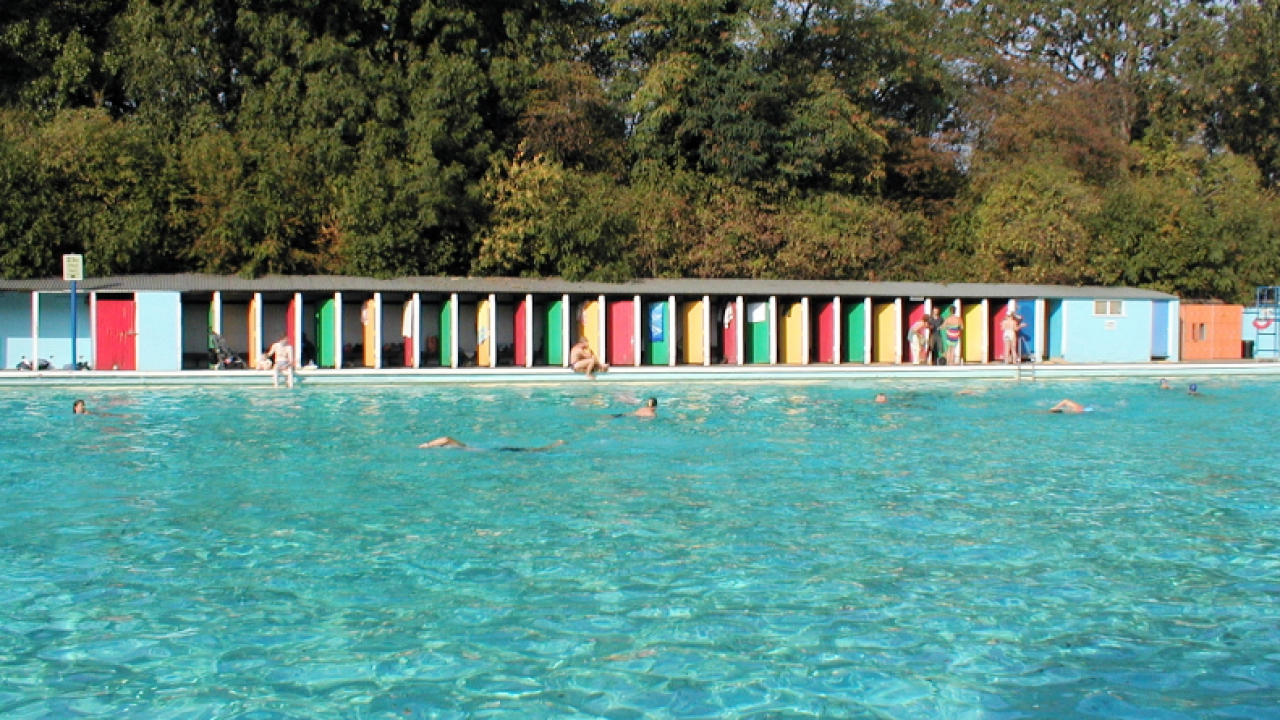 Probably the lesser known lido on the list, Tooting Bec Lido has a lot to offer. It is in fact Europe’s largest outdoor pool, with 90 meters of water. “It feels more like swimming across a lake than a pool,” says Isabel Choat, in the Guardian.

The lido is also somewhat of a local celebrity. The iconic bright red, yellow and green changing room doors have been the star of many movies and advertisement campaigns, including Brad Pitt’s boxing pool scene in Snatch.

Opened in 1906, it’s one of the UK’s oldest open-air pools. Holding one million gallons of water, Tooting Bec Lido is probably the safest choice if you want to avoid those busy summer crowds.

In 2019, Park Road Lido celebrated its 90th birthday and it has lots to celebrate. Opened in 1929, the lido is one of the oldest open-air lidos in this part of London. It was immediately adored by locals and became a place for leisurely swimming for the entire family. Katy Ferguson, from the Park Road Lido User Group, told the local paper Ham High that “It was about there being somewhere to swim for everyone, not just the people in the posh houses. It was about somewhere kids could learn to swim, even now it serves that purpose.”

Katy added, “There was a tearoom and a pavilion and, of course, there’s the unusual feature of leylandii surrounding the lido, which remains just lovely. It’s a place that has a lovely ambience about it.”

Nowadays, the lido has state of the art facilities which will ensure that the pool is accessible to all, no matter your ability or disability.

June 8, 2022 Boris Johnson Survives Vote of No Confidence by the Skin of his Teeth
Next post