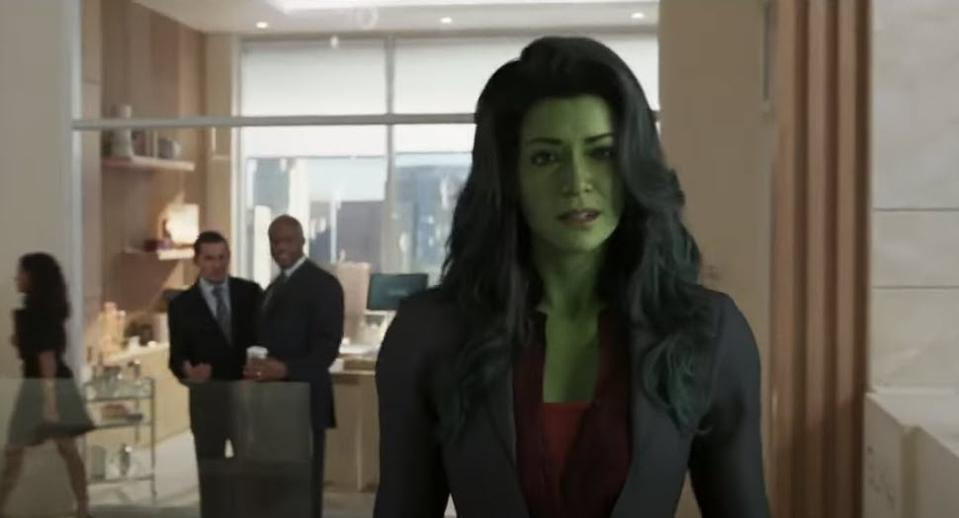 She-Hulk: Attorney at Law – A Review

She-Hulk: Attorney at Law premiered on August 18th and will feature nine episodes

Disney+ has a wide array of Marvel Cinematic Universe (MCU) spin-offs and even comic characters who haven’t yet appeared in the big screen films. One of these is Marvel’s She-Hulk, whose name offers a pretty good idea of how she might look and act.

This MCU series is unique because it’s a lighthearted law procedural comedy show. The main character is Jennifer Walters (played by Tatiana Maslany), an attorney assigned to a new super-human division of a law firm. Oh, and did we mention, she’s one of Bruce Banner’s cousins? (Aka, the Hulk).

Turns out Walters gets a wacky blood transfusion that turns her into a green, superhuman version of herself whenever she gets stressed or angry. The show explores Walters getting used to her new alter ego and her responsibilities dealing with super-human cases.

An interesting theme of the show is how it explores the implications of a woman becoming a Hulk. As it happens in the real world, women are unfairly expected to cater to the needs of men in positions of power. In episode one, Jennifer mentions how she has to deal with catcalling, mansplaining and other issues that might trigger her to become a literally hulking monstrosity in seconds in the middle of the street. Most women won’t have to deal with the legal procedures of supervillains, but they do have to deal with society. “I’m great at controlling my anger. I do it all the time. When I’m catcalled in the street; when incompetent men explain my area of expertise to me..”

The series also provides the MCU with some much-needed world-building in the law department, which is a primary drawing point for fans. If you’ve ever wondered what happens to the superhero film’s bad guy after they are defeated regarding legal procedures, then She-Hulk might be the show for you. How does the law hold magic users responsible, or how do supervillains get parole?

On a more practical level, She-Hulk: Attorney at Law isn’t How to Get Away With Murder. It’s a story of a female heroine that supports a branch of Marvel’s world commonly reserved for tertiary characters in the films.

The show’s CGI has been its most criticised aspect, with most detractors pointing out that this wasn’t the same CGI they saw in other Marvel shows, such as Loki. Others considered that the CGI works just fine.

Shrek and Fiona memes aside,  She-Hulk: Attorney at Law is an interesting take on a much-unexplored characterization of the MCU and promises to keep us entertained as Jennifer Walters settles in her new identity.