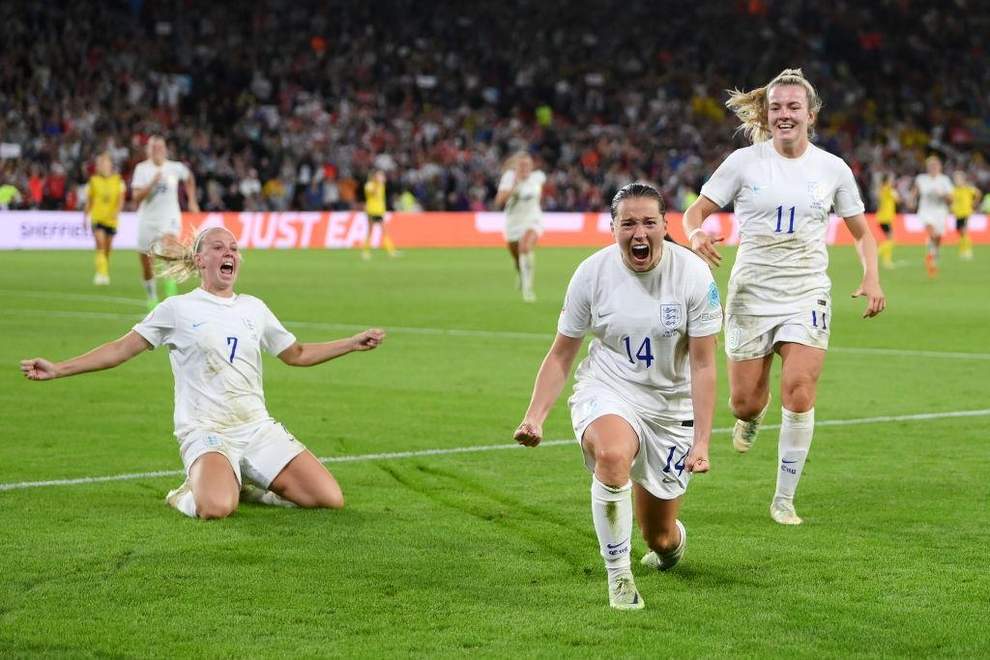 Since the Lionesses won at the 2022 Euros, attitudes towards women and the LGBTQ+ community in sports have slowly started to change

On July 31st, 2022, a team of ambitious women’s hard work and determination monumentally paid off. The Lionesses achieved what had started to become but a mere dream following the stinging failure of the men’s loss in the 2021 Euro final. Seemingly, they accomplished what the men could not with a 2-1 win against Germany in the 2022 Women’s Euros, England’s first piece of silverware at an international level since men’s success in the 1966 World Cup. Not only is the win significant for football fans across the nation, but the Lionesses’ triumph marks what will hopefully become a turning point in attitudes towards women and LGBTQ+ individuals in sport, something that has long sparked controversy to a ridiculous degree. Clearly, women and LGBTQ+ individuals do, in fact, belong on the pitch and in sporting communities, and can be incredibly successful doing so. And now, perhaps it is not too far-fetched to suggest that both parties can accomplish, in some cases, what their male counterparts cannot.

Women’s place on the football pitch has long been a contended issue amongst the nation. In 1921, the Football Association [FA] banned women from playing football in stadiums, deeming it to be “quite unsuitable for females”. This, during then and from a contemporary perspective, was an unreasonable assumption due to the success of teams like Dick and Kerr Ladies, who played games in front of tens of thousands of people for charity. This, therefore, highlights that women’s football was not only a popular entertainment and pastime even back then, but was directly benefiting society through the means of charitable donation. It was nothing less than a blatant act of misogyny. The policy was revoked exactly 50 years after it was first put into practice, but equal opportunities for women in football are still hard to come by. For example, following their achievement, the 23 members of the Lionesses have called Liz Truss and Rishi Sunak (those who are currently in running to be the next Prime Minister following Boris Johnson’s resignation in July of 2022) by means of an open letter to ensure every girl can play football at school if they so wish. Currently, football is not necessarily offered to young girls in PE classes at their school, rather, the Department of Education recommends girls are instead offered “comparable sports” to football, such as netball or rounders. As a direct result of this, the FA created a report and discovered that only six in ten girls can play football in their PE classes and, of those who are not allowed to play, 91% wish that they could. In short, women are slighted of their chance to follow their passion and increase their chance at a successful football career from girlhood. 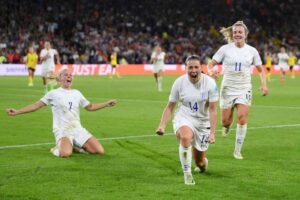 However, we can look to the Lionesses’ success as somewhat of a turning point in interest in women’s football. According to PinkNews, “The team’s skilful performances in the tournament have sparked unprecedented national interest in women’s football – something the team is now rallying to cement – and has marked a turning point in attitudes towards female footballers”. But not only has a difference been made for attitudes towards women’s place in sporting communities, but for attitudes to LGBTQ+ individuals in sports. Of the Lionesses, there are 8 out and proud members of the team: Lauren Hemp, Beth Mead, Rachel Daly, Demi Stokes, Jill Scott, Fran Kirby, Jess Carter and finally, Beth England.

Homophobia towards women who have chosen to play football has also been a continuous issue, irrespective of their actual sexuality. According to a 2008 report published by Women’s Sport and Fitness Foundation, “Some girls avoid certain sports for fear of being perceived as unfeminine or lesbian; some parents discourage their daughters from taking up sport; some lesbian athletes avoid going public about their sexuality in case they experience prejudice from other athletes and coaches or lose public support or sponsorship.” In 2022, this is not an issue that we as a society have resolved. 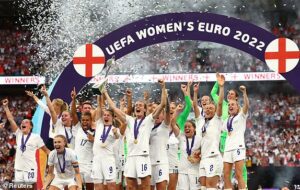 Lionesses win at the Euros © Reuters

Misogyny and homophobic comments are seemingly not limited to the audiences and fans of football, with Scottish ex-footballer and now a commentator for Sky Sports, Graeme Souness, publicly calling football a “man’s sport”. However, this does not discredit the remarkable accomplishment of the Lionesses for both women and LGBTQ+ individuals, who are now likely to feel more represented due to the brave openness the above members of Lionesses have displayed regarding their sexuality. And, thankfully, an outpour of support and happiness has obscured the negativity.

This is exactly what the LGBTQ+ members of the Lionesses should be proud of. But, as a team, all members regardless of their sexuality have achieved the unthinkable for improving attitudes towards women’s place in football, which is absolutely a cause for celebration by the 23-member team, women, girls and LGBTQ+ individuals across the nation. August 23, 2022 Gemma Collins: Britains Fabulous Reality Star We All Love To Hate
Next post
August 23, 2022 What This Venus In Leo Will Mean For Your Love Life