You may have noticed recently that non-English language music is making a comeback on streaming platforms and on the radio. Thanks to the likes of Rosalia, Bad Bunny, Karol G and Maluma the Spanish language has a permanent place on British charts. On the same charts, you’re also likely to find the Korean Language too, due to the rise in popularity of K-Pop and the bands Black Pink and BTS. In the context of a globalised world, it’s great to see the music industry following suit. And, now that more and more young people are enjoying the consumption of music in foreign languages, it raises the question, ‘who’s next?’ Could it be Polish artists? Why not!

Poland has innumerable political and historical links to the UK, dating back to before the Second World War. Currently, there are over 700,000 Polish-born people resident in the UK, who have brought with them their unique culture and wonderfully complicated language. Musically, Poland has a lot to offer. Many modern musical artists span multiple genres, most of which could easily be considered “radio-friendly.” Here are some of Poland’s best acts poised for international success.

Brodka has had both a conventional and unconventional journey in music so far. After winning the 2004 edition of Polish Pop Idol, Brodka was set to go mainstream, making commercial music that would guarantee big returns. Instead, Brodka decided to ditch the generic pop and produce music that was true to herself. The result was a string of innovative and avant-pop albums that pushed the boundaries of Polish pop. Brut, her latest album, is a fusion of Brodka’s fun and colourful personality, matched with a ‘brutalist’ theme.

In an interview with Giglist, she talks about this contradiction, “BRUT is partly an album about being stuck in between. About not fitting in and not wanting to follow the patterns. Brutalist buildings are a bit like that. Often inserted into urban tissue, between big glass skyscrapers and old tenement houses. People don’t know if they love them or hate them.”

Dawid Podsiadło is probably one of the biggest and most successful musical Polish artists of the moment. In 2013, Dawid released his first studio album, Comfort and Happiness, after signing a huge record deal with the international label, Sony Music. Since then, his career has gone strength to strength, as Podsiadło regularly packs out stadiums and festivals around the country – even supporting Lana Del Rey at her Warsaw shows. Podsiadło regularly headlines Męskie Granie, a summer concert tour of major cities in Poland, with the purpose of showcasing the diverse musical talent of the country. In 2021, Dawid released I Ciebie też, bardzo, alongside Mateusz Dopieralski, Daria Zawiałow, as part of Meskie Granie Orkiestra 2021. The song fast became one of Poland’s most well-known modern hits, racking up over 42 million streams on Spotify alone.

“I have so many good songs that there is no time to waste,” said the 24-year-old singer to The First News. In just a few years Sanah has become one of the biggest pop stars in the country. Sanah has a unique ability to blend dark melodies with incredibly catchy indie-pop lyrics. One of Sanah’s biggest hits, Medlodia blew up overnight. She told TFN, “I still can’t believe it. Medlodia wasn’t even planned as a single but we released it after we received positive feedback and the result was better and better.” Since graduating from the prestigious Fryderyk Chopin University of Music in Warsaw, Sanah already has a string of hits under her belt. Part of Sanah’s appeal is the ability to make an old-fashioned visual aesthetic seem fresh, young and modern. She continues: “I am happy to see my songs change and grow with me as I’d like to show my audience what’s playing in my head at this exact time.”

Young Leosia is a controversial figure in Poland. Some consider her to be Poland’s answer to Cardi B, others grossly disagree, slamming the music as “trashy hip-pop”. Whatever your opinion on Young Loesia, she is everywhere! From Szczecin, Loesia, who was born Sara Leokadia Sudoł, rose to fame thanks to the single, Szklanki, which reached number 1 on Polish Spotify, with the video topping 36 million views on YouTube. Young Leosia is one of those bittersweet artists that only comes about once in a while. Although controversial, the big-budget videos and catchy lyrics have the potential to catch a wider – potentially international – audience. 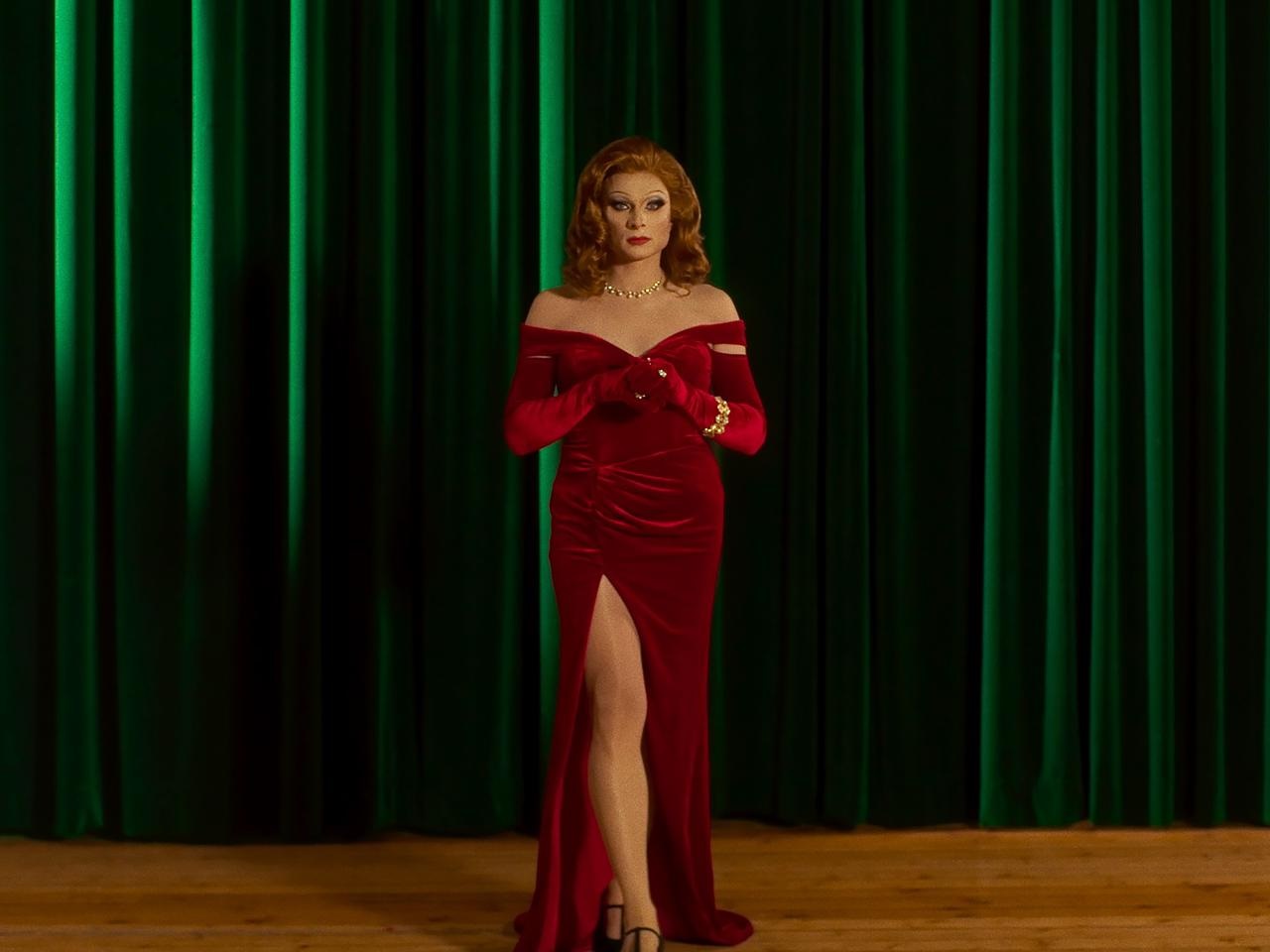 Ralph Kaminskiy in drag (from IMDB)

Ralph Kaminskiy is one most diverse and innovative musicians in Poland at the moment. Not only does Kaminskiy have a classically trained voice, but he is also a brilliant songwriter, composer and creative genius. His music draws upon heavy themes of nostalgia, folk, and 1970’s/80s sounds. His most successful and popular album so far is Młodość, which was released in 2019. Młodość was a major turning point in Kaminskiy’s creative journey, as it saw their transition from a stripped-back and neutral aesthetic, to a big-budget, high-glam, and camp appearance.

Previously Ralph presented a shy domina when in the public eye, wearing neutral clothing, in a sort of guy-next-door look. With Młodość, Kaminskiy underwent a complete transformation, consisting of a long bushy blonde wig, makeup, and ABBA-style platform heels. With each subsequent album/era, Kaminskiy has revamped his wardrobe and image, which has cemented Kaminskiy as one of Poland’s most risk-taking performers. Currently, Kaminsky is promoting his upcoming 70s/80s disco-inspired album, with their first single, titled Bal u Rafała. Kaminskiy is one to watch!

July 11, 2022 Attention Span Problems? TikTok Could be to Blame
Next post